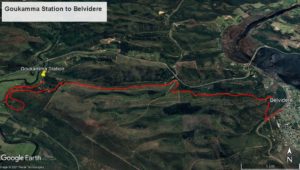 This trail is 10 km long and is completely off road. Starting from Goukamma Station it follows the old railway track for about 3 km, giving it a gentle uphill gradient and meandering along the contours of the surrounding hills. Beautiful views of the green Goukamma Valley and tranquil Goukamma River abound. The surface between the tracks have been filled in with sand or gravel ensuring that the ride is not too bumpy.

Views from the old railway track

At the top of the hill one can see an old ruin under a huge Coral Tree (Erythrina). Old mud bricks and stone and mud walls are all that remain of this building. This is possibly the ruins of the Terblans homestead – a well known stop over point for travellers before the road between George and Knysna was built.

From there the trail follows a long gentle uphill on a well maintained path, with the old railway line directly below it. Eventually Keytersnek is reached and the track now follows the contour above a large stand of bluegum trees while the railway track winds its way slightly further down around the hill towards Belvidere. The track finally reaches the Brenton road about 400m up from the railway crossing.

Parking is at the Goukamma Station or at the Belvidere turnoff from the Brenton road. 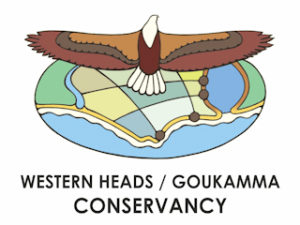